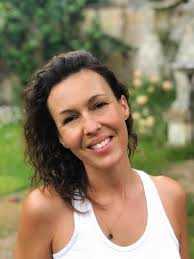 Annie's love of yoga began during her travels around Asia in 2003. She found much inspiration and feel in love with the collective art of yoga, movement and meditation. Her intensive studies began 2004 in traditional 'Mysore Ashtanga' in Byron Bay Australia. Annie then settled in the South of France in 2005, and continued to deepen her yoga practice. She completed her yoga teacher training with 'Yoga Alliance' in India in 2007. She also fully qualified 'Family and Children's Yoga' with Uma Dinsmore-Tuli, in the UK in 2009.

Over the last 10 years of teaching yoga, in the south of France, Annie has developed a fluid, feminine, creative style of yoga teaching. Specializing in Led Ashtanga, Vinyasa Flow and Yin Yoga Weekly collective classes in English and French, with a strong international 'private' client base also. Her heart, roots and personal practice still in a traditional 'Mysore' practice. Annie has also had great honor to be asked to teach on a number of private yoga retreats in 2013 and successfully marketed/designed and ran her own 'Yoga/Detox Retreat' in the south of France in 2014.

Annie is a creative, lighthearted person who has a joyful and open-minded approach to her yoga and teachings. She studies and travels to keep her approach fresh, enjoying new fusion styles of yoga. Annie's yoga passions also include; yoga dance, yoga nidra, chanting, music, massage and relaxation techniques.

Simona's passion for teaching yoga has spanned 23 years. She enjoys weaving mythical story telling through her  classes which are both fun and challenging and encourage playful exploration of both the spiritual and physical aspects of yoga. Simona loves to lead people on their own personal journey of self-knowledge and self-healing and admits how wonderful it is to witness the...

With over two decades working in health & fitness, Virginie has developed a thorough teaching method yet offers a creative approach, fusing disciplines she has trained in including yoga, strength & conditioning and dance. Addicted to Core, she believes in building strong foundations to move freely, effectively and gracefully. Also a doula, perinatal exercise specialist & trained in pre/postnatal nutrition...

With a degree in Sport & Exercise Science and a passion for Body Positivity, Emma brings intelligent cueing and clear explanations to her classes. Emma draws inspiration from the movements and techniques of Yoga, Pilates, Myofascial Release and more to create an exploratory practise that calms the nervous system and empowers us to show up for ourselves and others in...

Holly’s understanding of movement and the anatomy was developed extensively during her career as a contemporary dancer. The deepening of her teaching experience began when she started facilitating community-based creative arts leadership training programs as well as international meditation retreats. Holly learned yoga and meditation at an early age and has enjoyed teaching students and teachers for 20 years now. ...