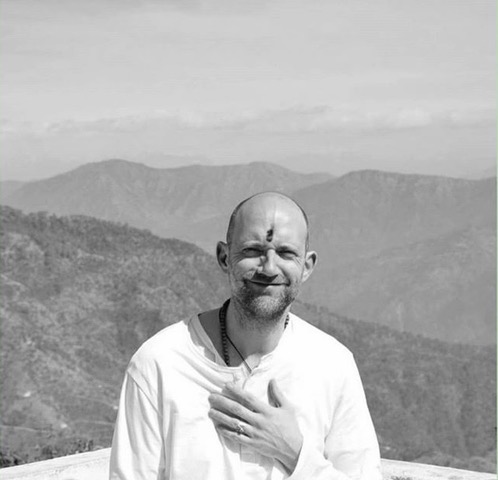 Tim has been playing music for over 25 years but it wasn't until his late twenties that he realised it was singing that gave him the greatest joy. After a spiritual awakening and some years experimenting with different kinds of voice and sound healing he did his first workshop with Chloe Goodchild and The Naked Voice in 2005. This transformative experience crystallised in 2006 with the release of his first CD Planting Peace, running regular chanting groups and a life-changing trip to India. Since then Tim has worked extensively with Chloe, becoming a Naked Voice Facilitator and been witness to the incredible power of the voice and chanting in particular.

Tim is a regular at UK Bhakti Festivals and yoga gatherings and in 2012 released a kirtan CD, Devotional Heart, produced by Tabla Tom. The follow-up 'Give It All Away For Love' was released in 2016. Both are available at the Yoga Bodhi shop!

"A wonderfully uplifting & meditative first time for me at Yoga Bodhi. Tim's hypnotic chant took me to another state of consciousness ... a blissful state to visit." - Robin Oneile

"Tim is a dedicated pilgrim of prayerful chant and song. His devotional heart sound and meditative mantras, penetrate your mind, inspire participation, and awaken your heart." - Chloe Goodchild - Singer, Author "The Naked Voice"

“There is a light that shines beyond all things on earth, beyond us all, beyond the heavens, beyond the highest, the very highest heavens. This is the light that shines in your heart.” Chandogya Upanishad. Simona's passion for teaching yoga has spanned 23 years. She enjoys weaving mythical story telling through her classes which are both fun and challenging...

“It always seems impossible, until it is done” Nelson Mandela. With over two decades working in health & fitness, Virginie has developed a thorough teaching method yet offers a creative approach, fusing disciplines she has trained in including yoga, strength & conditioning and dance. Addicted to Core, she believes in building strong foundations to move freely, effectively and gracefully...

“Do not kill the instinct of the body for the glory of the pose. Do not look at your body like a stranger, but adopt a friendly approach toward it. Watch it, listen to it, observe its needs, its requests, and even have fun. To be sensitive is to be alive.” Vanda Scaravelli. With a degree in Sport &amp...

“Life is amazing. And then it's awful. And then it's amazing again. And in between the amazing and awful it's ordinary and mundane and routine. Breathe in the amazing, hold on through the awful, and relax and exhale during the ordinary. That's just living heart-breaking, soul-healing, amazing, awful, ordinary life. And it's breathtakingly beautiful.” L.R. Knost. Donna's motto...